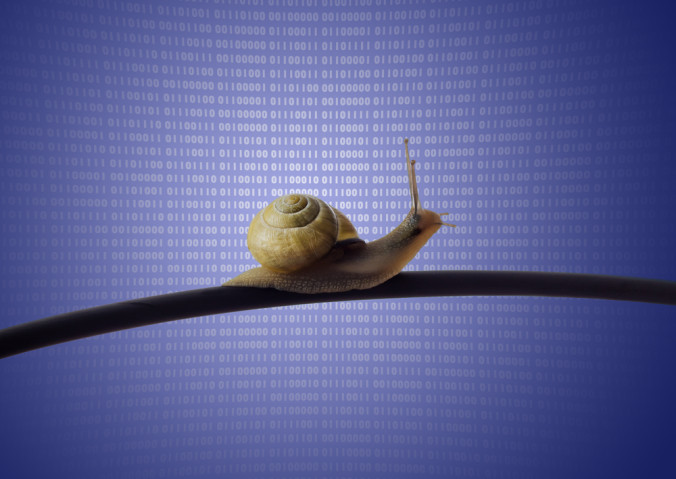 Scaling back on design may sound like bad strategy, but if your visitors are usually on slow connections, it may be the wiser business choice. Here are four tips on how to keep visitors coming back for more.

Internet fun fact: In the United States, by some estimates, as much as 3% of Internet users in 2013—about 8 million people—were still using dial-up connections. Even among “broadband” users, many are getting 1.5 Mbps or less; this was blazing speed 10 years ago but painfully slow these days.

The fact is, a good chunk of the population is still plodding along at slow network speeds. The reasons vary, but many of these users have no broadband option because they live in rural areas not served by cable or 3G/4G wireless and are too far away from telephone company central offices for reliable DSL. And some people just like it better because it’s less expensive. #WhateverFloatsYourBoat

Welcome to life in the slow lane, where short videos take forever to load and even simple web pages can be infuriatingly slow. And you can forget about Skype or live streaming of anything.

If you have site visitors who are on slow connections, you might consider taking steps to ease their pain on your site. Here are some ways you can help them:

Is Slowing Down Your Site Worth It?

Of course, you have to weigh the costs of implementing these solutions against the potential payback, as well as the potential impact on your broadband visitors. Will they be turned off by a minimalist design? How far can you strip down your site before it loses its value and will it still be too slow for narrowband users? You have to consider these and other tradeoffs. You may decide that reaching those users is not worth the trouble, and you would not be alone. Three percent doesn’t sound like much, and in the grand scheme of things, it isn’t. But the long tail teaches us that reaching even a small audience can be profitable, and some optimization solutions don’t really cost much to implement.

Someone is going to go after those potential customers. It might as well be you.